Problem Solver, that’s how Joseph-Olivier Biley is defined. Both in its DNA and in its start-ups, it likes to face problems, solve them and convert them into opportunities. After excellent studies in the four corners of the world, Joseph-Olivier returned home to Côte d’Ivoire with the crazy ambition of making his country the reference in agricultural technologies. Impossible, you think? You don’t know this successful entrepreneur yet!

His dream is no longer to be an airline pilot, but to change the African continent into a reference in the technological sector. Proud of his roots, Joseph-Olivier has ambitions for the future of Côte d’Ivoire and Africa.

After growing up in the Ivory Coast, Joseph-Olivier moved to France to pursue his studies because of the civil war raging in his native country. He arrived in Amboise, a town near Tours during his senior year. His teachers are certain: he will never get his diploma. He obtained it with honors.

After a year at university, Joseph-Olivier decided to enterINSEEC to do a double BBA in marketing and international finance. He took advantage of the school’s locations to study in Paris, London and Chicago. During his master’s degree, he was selected for the Start Up Factory excellence program in San Francisco.

“It was a game-changing experience in my entrepreneurial journey. Only 8 French students were selected. San Francisco is the American dream! It was there that I realized that anything was possible. In a few months, I gained several years of experience and expanded my network. These contacts have served me well in my career and the people involved remain very available, remembers Joseph-Olivier.

In addition to the Start-up Factory course, his studies at INSEEC brought a lot to Joseph-Olivier. He remembers a professor, Robert Bradford, who taught Public Speaking at the INSEEC campus in Paris. Very shy, Joseph-Olivier had a lot of trouble expressing himself in public. Robert Bradford showed him that he was talented and gave him the tools to help him. He went from being a shy student to an entrepreneur who gives lectures all over the world!

His second greatest skill acquired at INSEEC is managing pressure and stress. The school organized “crisis nights“, where a company proposed problems to be solved in a group during one night. A real challenge that allowed him to reveal his potential and learn to manage his stress in any situation.

“It’s what you do with the degree that matters. INSEEC gave me a toolbox that I used to create my company. I use it daily for its development. I know how to use the right tool to solve each problem“explains Joseph-Olivier.

Knowing what you don’t want

All his internships were with Maersk Line Maersk Line, an international container shipping company. In this way, he was able to discover all the departments of the company, present in Ivory Coast.

“I quickly realized that I was made to be an entrepreneur, not to work in a company. I want to be seen as someone who can make a difference and who is useful to society. Maersk Line taught me what I didn’t want and made me want to start my own business“says Joseph-Olivier.

He had already had a taste of it during his studies. With his sister Jessica Biley he founded OJei an ethical, ethnic and solidarity-based clothing brand. Their goal was to show the world a different image of Africa, highlighting culture and values. The inspiration is Afro-Pean, with the alliance of organic cotton and loincloth.

After 3 years of adventure, Joseph-Olivier gives his shares to his sister. Nine years after the creation of the brand, it still exists and is very successful.

A problem to solve

At the end of his studies, the young graduate returned to Côte d’Ivoire to become an actor of change in his country. Certain of wanting to undertake, he thinks about a project. It was while visiting his father’s plantation that he got the idea.

The plantation is several hours from Abidjan, where his family lives. Her father had entrusted her to a “trusted” person to manage her in his absence. On his way there, Joseph-Olivier notices that the plantation is in bad shape.

“That’s how it was born WeFly Agri . My father’s problem was the hours of driving to check on his plantation. The initial idea was to follow it remotely, via drones. Then, I expanded the scope of action with the detection of diseases and the reduction of costs for the planters“, he explains.

Joseph-Olivier is a firm believer in Africa’s development potential. His ambition goes beyond WeFly Agri: it’s a successful business, but he doesn’t want to limit himself to agriculture.

In 2021, he creates JooL International to take a new step forward with a more technology-focused company. He began to manufacture drones for agriculture, but also land robots and software, all made in Côte d’Ivoire!

“I would like to democratize the use of the drone in agriculture. I wish all growers would think about using a drone before making a decision, whether it’s to apply fertilizer or pesticides“, he explains.

While this new company is new, with many products in the development stage, it is already profitable. He bought a 6-year-old French start-up to obtain strategic patents for its development, making his company the first to do such an operation in its region. In the first quarter, JooL International has already made more than €1 million in sales, while investors were expecting only €300,000 for the year. Once again, Joseph-Olivier is there where he is not expected and explodes his objectives.

Either we complain or we do

“My mission is to make Côte d’Ivoire a reference in terms of intelligent plantation management in Africa. The next step is to do the same thing with Africa, in the world“says Joseph-Olivier.

To achieve this, in addition to his start-up JooL International, he co-founded the #Ci20 a college of start-uppers. The association gathers the excellence of the start-ups of Côte d’Ivoire, in each sector of activity. The objective is to create a favorable framework for their development.

“Prior to the creation of #Ci20, there was no supportive ecosystem for innovative companies in the country. Either we complain or we do! I’m from the second school, so I thought why not?“says Joseph-Olivier. The #Ci20 interacts with the highest authorities of the country, participates in the creation of a regulatory framework favorable to entrepreneurs and investors and promotes the competitiveness of Ivorian start-ups.

The government was so impressed with the initiative that they chose, among the constituent members, some young entrepreneurs to become ambassadors of innovation in Côte d’Ivoire. Including Joseph-Olivier, of course! A great opportunity that pushes him even more to give the best of himself for his country.

His advice to students: anything is possible!

“Yes, anything is possible regardless of age, training, background or what you have been told. A tree always starts with a seed. You have to plant it in the right soil and nurture it. Sometimes you need help from other people or fertilizer to help the tree grow. Sometimes the seed doesn’t bring results right away, but that doesn’t mean it isn’t good. Perseverance allows the plant to germinate and grow into a tree. You have to be patient, disciplined, passionate and resilient.” 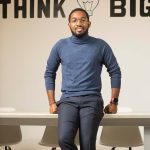